A Mile Is A Long Way To Swim 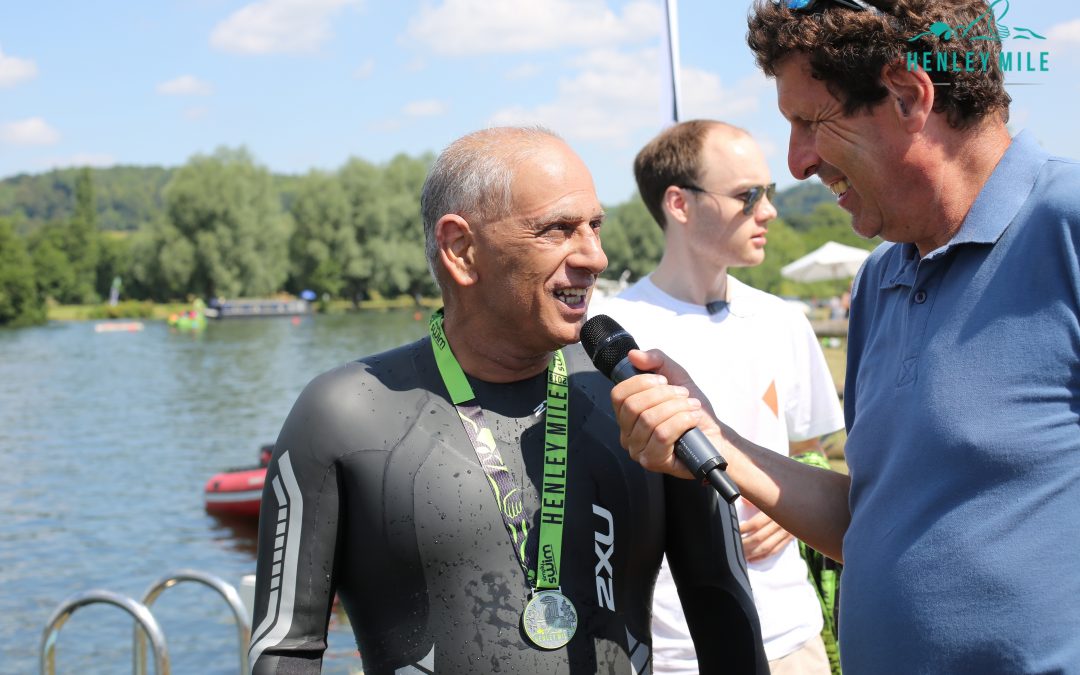 Well hello there wide world – it’s been a while since I last posted but hey, life just has a way of getting in the way! Still, I’m here now and back for the long haul! And I’m still running for my life!

July 15th 2018 was a fabulous day; arriving at Henley-on-Thames on a warm Sunday morning to get ready for something I would never have thought possible – swimming along the River Thames for a whole mile!

Joining me in the swim were my daughter, Laila, and her boyfriend, Matt. Supporting us were my always wonderful son, Nahum – who was the first person to get me to swim a mile (in the local pool), my beautiful wife, Ruth, brothers (Sukhi and Pepsi), sister in-law Sita and my great buddy. Tim. My heartfelt love and thanks to them all.

So, the swim began with a one mile walk from finish point to start point and then a safety briefing, before we swimmers entered the water for a short warm up swim to the start line, to tap in at the start of the swim. I won’t bore you with further details of the swim but I can say this much. A mile is a long way to swim. Especially so for someone who only started to swim properly in January of 2018.

I’ll be honest and tell you that the swim itself was pretty easy. The mile did feel a lot further once I was in the water than it did when walking to the start line but the physical effort of the swim was not as great as I’d feared before the swim. Let’s just say that I had enough energy to both swim and keep up a conversation with the various safety personnel stationed along the route.

What kept me going was the encouragement from my family, walking alongside on the riverbank, and the hours and hours of practice before the event.

Slipping off a pontoon and into the water to swim over to the start point, I recalled the Group 1 Level 1 training morning with the Royal Docks Open Water Swimming club at the Royal Docks in London on the 5thMay 2018 – during which we were taught about water entry, lining up for the start of the swim, sighting along the route and keeping pace and position.

We get into the swim, and I recall Nicole, my tutor at Loxford Leisure Centre, who started teaching me the basics of swimming back in January 2018 – body position and stroke technique; making sure my arms stretched forward during the catch, making sure my thumbs skim my thighs during the pull and into exit, making sure my body rotates. Thank you Nicole!

However, because my wetsuit wasn’t pulled up properly and my arms kept getting pulled back by each time I stretched forward, I had to resort to the hated breaststroke! But that was okay because Becky at the London Aquatics Centre had worked hard at trying to teach her dopey pupil Rana to do a breaststroke well enough to use as a backup. Thank you Becky for putting up with my inability to kick properly and making sure I did pick up enough skill to use the stroke!

In the weeks running up to the swim day I had been obsessively keeping an eye on water depth in the section of river at Henley (because of my fear of dying by drowning!), but I can honestly say that the depth of the water was never an issue for me during the swim itself – which was also probably down to the swimming in much deeper water at the Royal Docks – and the bulk of the swim was a simple matter of keeping my mind on my technique and just keeping on going. I’m pleased to report that I never once felt like giving up and never felt too tired to press on. Hours and hours of laps in the 50 metre pool at London Fields Lido (Hackney) paid off. And you know what? It was fun!

That being said, a mile isa long way to swim. Before the swim we’d had a look at the various marker points for ¼, ½, and ¾ mile points but from my perspective as a swimmer they each seemed so far apart! The key thing was swimming on from marker point to marker point and keeping an eye on the temple at Temple Island, which marked the last few hundred yards of the course and was visible as a beautiful, pale structure off in the distance.

I was so afraid that I was swimming too slow, and that the safety lookouts along the course would ask me to stop, that I spent much of the swim chatting with said safety folks – who told me that actually, as I was able to both swim and talk, there was no danger of my being stopped. So I swam on – albeit slower than I could have, because I spent so much time chatting!

Eventually Temple Island heaved into view and I knew the job was almost done. During the last 100 metres I could suddenly hear lots of voices over a speaker system and people cheering. It was only when I climbed out at the finish line (remembering to tap my electronic tag to ensure I was logged in as having completed the swim) that I was suddenly grabbed by a presenter from the swim and given an impromptu interview. Apparently Laila had told the event MC that about my age and my journey to becoming a swimmer and, even though I was last in my ‘wave’ of swimmers, I had a brief brush with celebrity. However, I have to agree with what my daughter said, “If you have a goal, a plan and determination, you can achieve anything.”

Looking back on the swim I can now say that much of my fear of dying by drowning has abated. Since the Henley Mile of July, I have also  swum half a mile at the Storm The Lakes Swim Festival September 2018), as well as kept up (albeit irregularly) with swimming in local pools.  I have now also started serious training again, for the Henley mile 2019 and for one other event about which I shall tell you more in my next post. The one big change is that I now feel pretty comfortable in the water and it no longer holds the same level of fear it once did, which makes me a very happy Rana!